Cooling system components – Vehicle engine produce some heat from the burning stroke, the heat is conducted to all of engine parts. That’s what make the engine temperature increase over we turn on the engine. That is why the engine must include a cooling system.

The engine cooling system, is a part that have several job, among others ;

The working principle of the cooling system, is to move the heat from the engine components to the free air. This heat transfer process requires a series of components.

In general, there are two types of cooling systems based on its heat transfer media ie;

Both have the same function, just different range. For air conditioning, suitable for use in small capacity engine such as motorcycle engine. While on a more enclosed car engine, it requires a water medium to move heat.

All The Components Of Engine Cooling System 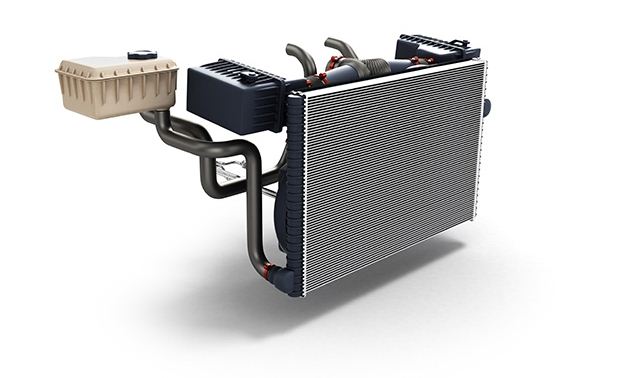 Radiator is an iron-shaped composers used to cool coolant. The working principle of the radiator is to move the temperature from water to free air.

In a radiator will be encountered some parts like 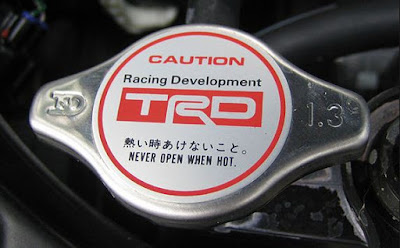 The radiator cap serves as the cover of the upper tank radiator while keeping the air pressure inside the cooling system. This lid construction is not like a bottle cap or other lid, because there is a pressure regulating mechanism then there are other parts inside this lid.

The air pressure inside the cooling system may change due to the fact that the coolant temperature. The higher the temperature, the further water will evaporate. It has an effect to increase the air pressure within the system.

The function of radiator hoses are to supply radiator coolant from the engine to the radiator and back to the engine. Although its function is only channeling the coolant, this parts can not be underestimated.

The radiator hoses are required to be flexible but it must hold the coolant that have boiling temperature. Therefore, the radiator hose is made of special rubber which is designed to survive at high temperature but it flexible too.

There are about three types of hoses in the cooling system, namely; 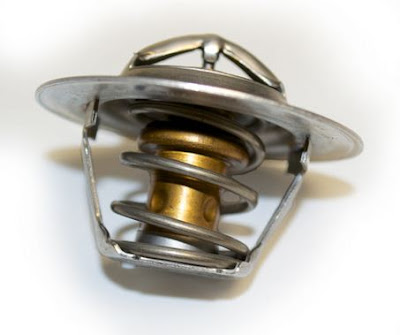 Thermostat is a part that have function like valve. This valve will close and open the port between water jacket and high temperature radiator hose. It works to speed up the engine to get the working temperature.

Thermostat works with close and opening the chanel of water jacket to the output chanel in the radiator hose. When the engine temperature is low, thermostat is fully closed. That makes closed coolant circulation inside the water jacket. This circulation will faster engine temperature increasing, because heat from combustion chamber is circulate by coolant in all of engine part.

Water shell or more familiarly known as water jacket serves as a place to absorb engine heat evenly. The name of the water jacket is just a term that leads to the water channel around the engine.

The chanels are fill wit coolant and it shaped like a jacket to the cylinder block, so that it called as water jacket. When the engine is running, the heat generated by the combustion. It will increase the engine block temperature and the cylinder head.

Since there is coolant flowing in this channel, the heat will also flow along the coolant stream toward the radiator for cooling.

This tube serves to store evaporative cooling water. When the engine is in high temperatures, the coolant will evaporate and result in increased air pressure within the system.

To stabilize the air pressure, the evaporated coolant will be channeled into a tube through the radiator cap. In this tube, moisture will be condensed again to become a liquid.

The transformed vapor in the reservoir can be re-channeled into the cooling system when the pressure inside the system is vacuumed. This will prevent the reduction of coolant insde the system.

The cooling fan works to take down the radiator temperatures. The working principle of cooling fan is by flowing the air from outside through radiator fins. There are two kinds of  cooling fan, ie

When the thermostat is open, there are coolant flow from the water jacket to the radiator for decrease its temperature. Same with cooling fan, there are two type of water pump. Conventional versions driven by engine power and electric versions powered by electric current.

Thermometer is used to measure the coolant temperature. Later results from these measurements will be shown to the dashboard of the car. But in modern cars, the existence of this thermometer has been replaced by ECT sensors. 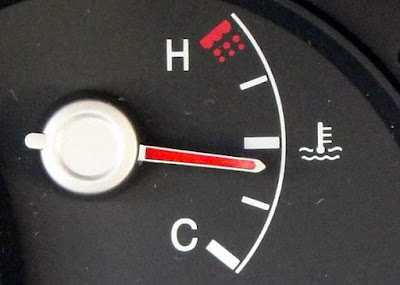 It is still incorporated in the thermometer to find out how much the engine coolant temperature are. The purpose of these two components is to prevent the engine from overheating, by showing realtime coolant temperature in the display info panel on the dashboard then the driver will know if the cooling system is malfunctioning.

Similarly complete articles and details about 10 parts of car cooling system. Hope can increase our insight and benefit us all.
« Prev Post
Next Post »