7 Parts Of Charging System and Their Functions

Parts of charging system - Charging system is a series of electronics that are made to suply electricity for the vehicle. We know that batery use as source of electricity, but battery is only save the electricity and can not produce it. So, it should be a system that use to produce electricity to charge the battery and suply all electrical load on vehicle.

The main component of the charging system is an altenator, this component is same as the AC generator that will turn the rotary energy into electrical energy using electromagnetic force.

Read also How Does An Altenator Work ? 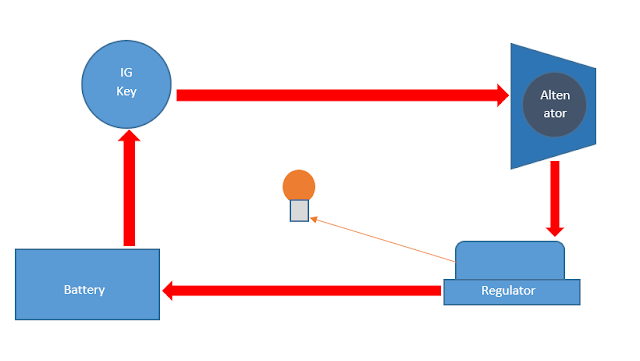 Fuse and fuseble links have different functions even though have the same shape. Fuseble link can be called as main fuse which is placed near the battery positive terminal. The function of this fuse is to protect the entire electrical system of the car from excessive currents. Generally the fuseble link has a capacity of up to more than 60 Ampere.

While the function of the fuse is as a safety of a series of specific electrical wiring, in conventional charging system there are two fuse with same capacity (its about 10-15 Ampere). A fuse is used as a voltage regulator fuse and another fuse is used to secure the CHG and Voltage relay.

CHG lamp or commonly also called “charging warning light” is an indicator light to indicate the presence failure of charging system. When the ignition key ON then this light will light up normally, as well as when the engine life of this lamp should turn on, if it is dead then it could mean the charging system failure.

The ignition key works as a switch. The charging system will be activated automatically when the engine is running, but to generate a magnetic field on the rotor coil must be done by a switch. 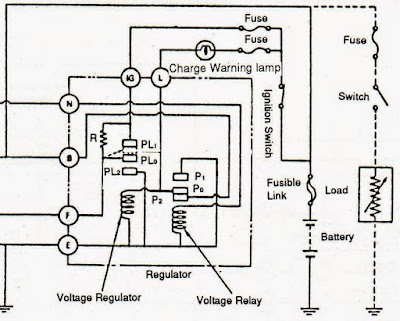 The regulator will be used to keep the voltage generated by the altenator not exceeding 14 volts even if the engine run in high RPM. This voltage setting aims to protect the electrical components of the vehicle to prevents over-voltage.

There are two types of regulators, namely type or conventional type and type of IC. The point type/conventional uses two coils to adjust the altenator's output voltage. While the IC Regulator uses an IC circuit (Integrated Circuit) to regulate the output voltage. 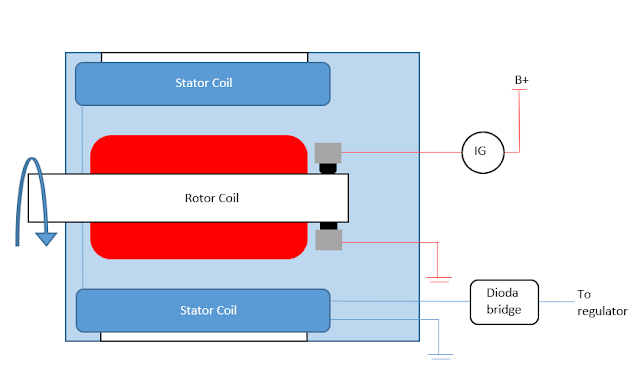 While the B + wire has a larger diameter than the standard wire and almost matches the stater wire. The function of this wire is to connect the terminal B altenator with Battery.
« Prev Post
Next Post »