You must have heard a whistle on the latest diesel cars. This sound, is quite tempting because the sound is very showing that the car is equipped with the latest technology.

The sound causes by turbo intercooler devices that are embedded in almost all diesel engines. Then, what is the use of turbocharger? what is the effect on the engine? and how does it work?

A. Turbocharger Definition On Car Engine 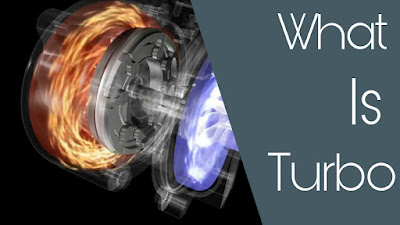 Turbocharger is a device used to maximize air supply into the engine during the intake stroke. It aims to get bigger engine power.

Turbocharger, already used on diesel engines for a long time. However, for now days turbo has produced with more upgrade. You must have encountered the label "VGT", "VNT", or "VCDI". All of it refers to the technology used on turbochargers.

What is the use of Turbocharger ?

We know that the power of the engine, depending to mass of air that flowing in to the combustion chamber. If the mass of air coming into the engine have much container, then the power will be high. However, to flow more air much need high engine capacity.

B. How Does Turbocharger Work ? 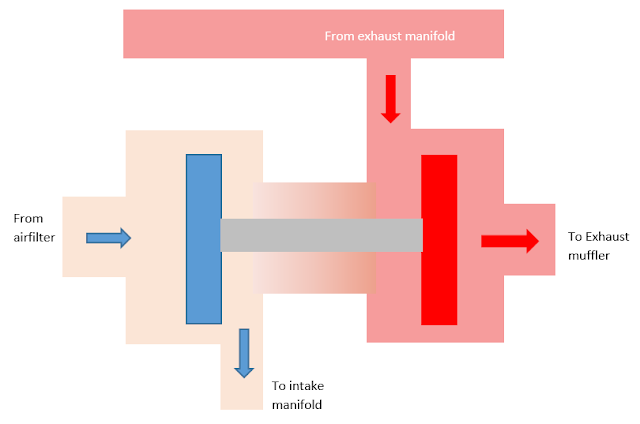 The question is, why is the turbine driven spinning? where is the power source ?

Apparently, the power source for spinning the driven turbine comes from the engine itself. Precisely on the exhaust gas, this waste gas still has residual energy in the form of gusts that are not small. If we put the turbine in the middle of the flow of exhaust gas, then the turbine will rotate with the speed according to the exhaust gases. 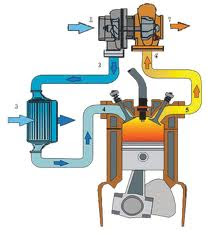 The turbocharger device must also be equipped with an intercooler

The intercooler function is to lower the intake air temperature so that the molecule can be smaller, it make more molecules of air can enter the engine. This will make the engine power much higher.

Advantages of Engine With Turbocharger


Talking about mechanism, there are several types of turbo on the engine, among others;

Supercharger has a shape similar to the turbo, but the supercharger uses a engine pulley as a source of drive turbine (its not using exhaust gases, but using V belt). The advantage, the air temperature will be lower.

This turbocharger as described above, using a blast of engine exhaust gases. Although the temperature is higher, this type has a higher air flow.

Electric turbo type is the flexible one, because it can be placed anywhere and not inhibit engine power. Thus, the engine power can be higher.

If you still have any question about turbocharger, you can write it by leaving comments below.
« Prev Post
Next Post »