What Is a Turbocharger and How Does It Works ?

Turbocharger is a component used to maximize air into the combustion chamber. The goal, obviously to increase engine torque. 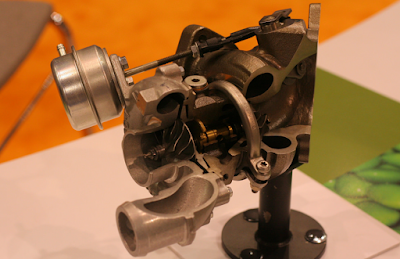 First, you need to understand that the engine generate energy from the combustion process. This combustion, occurs between three materials, they’re air, fuel and sparks. But on a diesel engine, it only consists of two materials namely air and fuel only.

This is where the turbocharger plays its role, it will make the air into the engine becomes more even though the engine capacity is small enough.

The first effect, the engine exhaust gas will be hampered. Turbochargers use combustion gas as a source of energy. As a result, the exhaust gases that should be smoothly towards the muffler will be slightly hampered. These obstacles will make the engine RPM slightly restrained, however the engine have more air coming into the combustion chamber. So there is no loss of power.

2. more fuel consumption than another engine with equal capacity

Positive effects are very pronounced, there is on the torque. Torque with engine power are different, engine torque is the torque that is applied to an object. So, when a car has a large torque, then the car is able to carry heavy loads even though running at low RPM.


In general, there are three kinds of turbochargers used on vehicles. Among others ;

Turbochargers use engine exhaust gases, the excess is in stronger airflow. However, the turbocharger must be equipped with an intercooler because the temperature of the air passing through the turbo will increase exposed to the exhaust heat radiation.

Supercharger using engine pulley as a source of energy. It is connected with a V belt to the charger compressor, the result is no problem related to intake air temperature.

As the name implies, this one works using an electric motor. The result is no problems with intake air temperature. Another advantages, this type also does not resistanced the engine power because it does not interfere with the flow of engine exhaust gases and this type isn’t connected to the egine pulley too.