Electronic fuel injection system is a series of fuel systems that utilize electro-mechanical parts to deliver fuel from the tank to the cylinder with an ideal ratio.

One of the main parts on the EFI system is the injector. Then, what is the definition of the injector? how does the injector work on the engine? check the content below

Definition and Function of Fuel Injector


A fuel injector is an electro-controlled valve that uses to spray out the fuel. In the petrol fuel injection system, the injector acts as a door to spray fuel from fuel lines into the intake manifold.

The injector function is not only a sprayer, but the injector also atomizes the fuel in the intake manifold. When fuel is in atomization form, the molecules can mix better with air.

When the injector is energized, the nozzle will open so that the high pressure fuel inside the injector can be sprayed out in the form of atomization.

Then who controls the performance of the injector? it is the job of the ECU. ECU (electronic control unit) will regulate the injector opening, and it’s . But ECU needs help from a series of sensors. 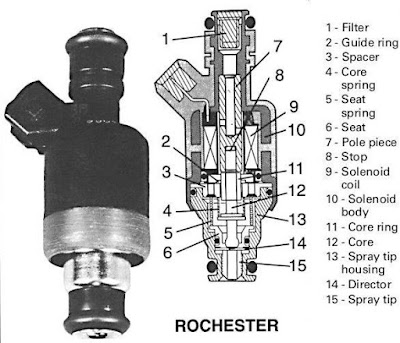 An injector works using electrical energy, when the voltage is applied to the injector the nozzle will open so that the fuel is sprayed. How long is the duration of the voltage given, affecting the volume of sprayed fuel.

There are three main components to the injector;


The tube is the main body of an injector (it’s cylindrical part), here is where the fuel terminated.

Solenoid is a magnetic coil that can convert electrical energy into motion energy. In the process, the voltage from the ECU enters the solenoid. On solenoids, electromagnetic forces occur from electricity flowing through the coil.

The electromagnetic force will move an iron core in the middle of the coil, this movement opens the nozzle.

That causes the fuel sprayed.

One thing that should not be forgotten, fuel sprayed in the form of atomization.

This happens because the gap on the tube is very small and the shape is circular. With high fuel pressure, the fuel will atomize.


There are three types of injectors that are widely applied; 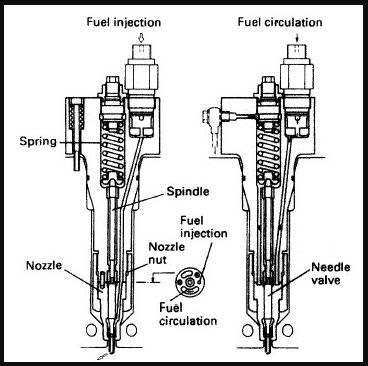 This type is also called a mechanical injector, it is caused by by its works which do not use electrical energy but instead utilize the existing fuel pressure.

The main component in this injector is spring, where in the injector off, the spring will push down the nozzle, and it causes the tube close. However, when the fuel pressure is increased spontaneously, the nozzle automatically opens.

But the opening of the nozzle is also very minimal because the spring is still held.

So, how controlled the timming and the duration of injector ?

It’s the job off high pressure injection pump. The pump will raises the pressure spontaneously when the timming reach, while the duration is controlled by the fuel barel inside the pump that the volume can be change depending on the gas pedal opening.

This type is widely applied to conventional diesel engines

Solenoid injectors work using electromagnetic principles, the process as described above. Where electrical forces will be converted into mechanical movements through magnetic coil.

The difference with the first type, the solenoid type has stable fuel pressure (continously). That is because the injector is controlled by ECU.

This type is widely applied to the EFI petrol engine, as well as the common rail diesel injection system. 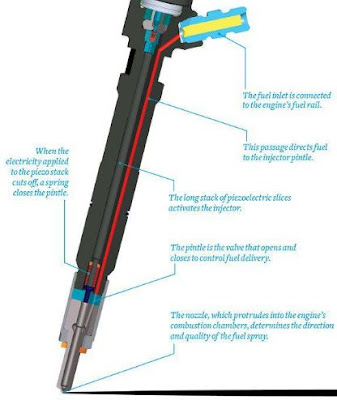 Pizeo fuel injector is an injector that uses pizeo slice material. Pizeo slice is a material that can change its volume when energized.

In this case, thousands of pizeo slices are placed in the injector. When the ECU provides a voltage, this pizeo slice will deflate. The deflate will make a minimum movement, and the movement is used to move the nozzle so that the nozzle gap is open.

This type is relatively new, so there are still few developers who use this model.
« Prev Post
Next Post »