However, the three materials above do not mix carelessly. But there is a comparison that shows the level of fuel and fresh air.

Especially fuel material, it must be supplied with a very appropriate level. So that the combustion in the engine lasts more perfectly.

This is what became the job of the carburetor, both on the car or motorcyclec, carburetor has function. But there are differences in the principle of work, it is because the motorcycle generally uses a single cylinder engine while the car uses a 4 cylinder engine.

Then how motorcycle carburetor work ?

In general, the carburetor has two functions. First it use to regulate RPM while the other is to mix air and fuel with the right ratio.

The carburetor has a component in the form of a throtle gas connected to the handlebar to pull back so that the engine RPM can change. In addition, the carburetor must also be able to supply gasoline with an ideal ratio for all RPMs.

Therefore, even though the motorbike carburetor is small there are many components in it which are very important. But overall the motorcycle carburetor construction is simpler than the car carburetor. 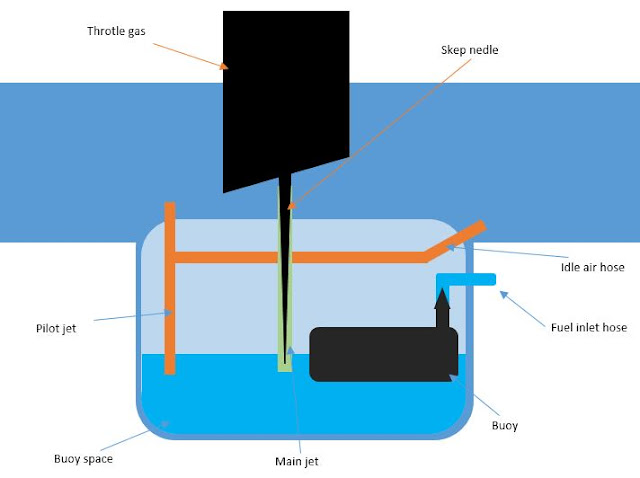 Generally, motorbikes use a variable venturi typ. It is the type of carburetor that the ventury width can be change.

When the throtle  gasis closed, the venturi width will be so small. It make the air flow from the filter to the intake manifold is limited.

So, the flow of air entering from the air filter is low and the result is a low engine RPM (idle RPM).

However, when the gas throtle is lifted, the venturi becomes wider. This causes faster air flow so that engine RPM is also faster. 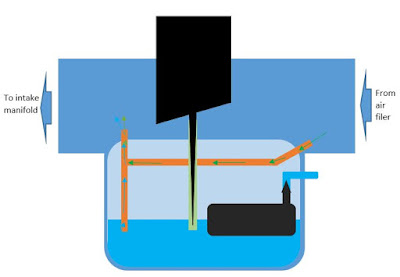 When the engine runs at idle RPM or the throttle gas is closed, there will be air flow from the filter into the idle air hole. On the other hand, the suction from the piston also makes the fuel from the buoy chamber sucked into the pilot jet.

The air from the idle hole air will meet with gasoline on the pilot jet channel.

We could say, at idle RPM, the air flow can be described as follows;

While the flow of gasoline when idle RPM is described as follows;

If we activate the choke system by pulling the choke lever, the air entering the pilot jet will be held back (the choke valve will partially close the air duct from the air filter) so that the piston suction lifts more gasoline from the buoy chamber, which makes the gasoline mixture richer.

2. When the gas throttle is pulled 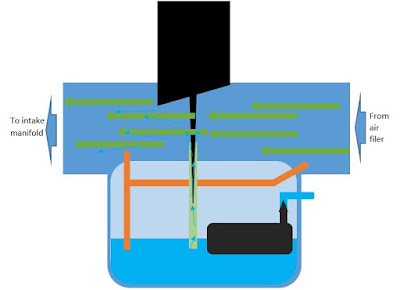 When the gas handle is pulled, the throttle gas is automatically lifted. So that the venturi width becomes bigger.

This makes the air flow from the filter to the intake manifold faster, so that the piston steps are faster and the RPM is faster too.

What about fuel supply?

That is, in the motorcycle carburetor there are two fuel channels. First the jet pilot and the second main jet, which is the main channel where the main jet tip is inside the venturi.

When the gas throttle is lifted, the air flow in the venturi will be faster. According to Bernoulli's law, when the air flow is faster then the pressure decreases.

The pressure drop inside the venturi will suck gasoline from the buoy space through main jet.

If depicted, the air flow;

While the flow of fuel;

Why doesn't gasoline come out from main jet when it is idle?

That's because there is one additional component called skep needle. This needle is tapered, which is increasingly pointed down. When the throtle gas is closed, this needle will close the main jet channel. That's what makes gasoline not out of main jet when idle.

Conversely, why doesn't gasoline come out of jet pilots when RPM is high?