4 Types of Fuel Injection System With Differences and Explanations

To adjust the engine RPM, it is done by adjusting the amount of air and fuel that will be inserted into the cylinder.

In the previous article we discussed how fuel injection works, in that article it was explained that the fuel injection system works using an injector that can spraying fuel into the intake manifold.

But if discussed further, we will find 4 types of fuel injection systems. Then what? and what is the difference? let's discuss it. 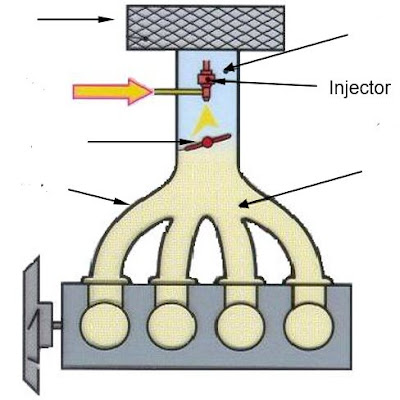 This system was found in the early discovery of injection systems in vehicle engines. At that time, an injector was placed on the throtle body as a substitute for playing a jet carburetor.

The result is the same as the carburetor system. Gasoline can be sprayed into the throtle body room but this gasoline comes out of an injector not from carburetor jet.

When compared to the carburetor type, it is clearly better because how much the volume of gasoline has been calculated before by ECU.

So that it can be more accurate.

However, because it only uses one injector, the engine's performance at high RPM is also slightly disturbed. 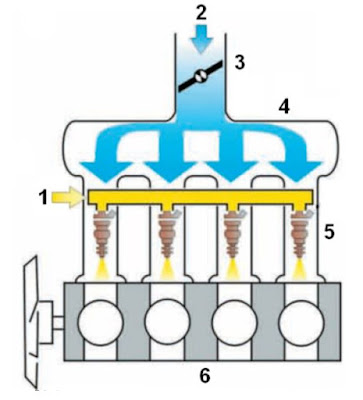 Multi point fuel injection (MPFI) is a newer technology than the single point type. Basically, this type is the same as the first type but the number of injectors is adjusted to the number of cylinders.

This means that for a 4 cylinder engine using 4 injectors.

Multi point injectors have the same scheme as a single point injector. But in this type, the actuator (injector) is added to more.

The advantages of multi-point injectors, fuel is more effectively channeled to the engine because the location of each injector is inside the intake manifold (in front of the inlet valve). So that when the fuel sprayed, the fuel can go directly into the cylinder .

But it has disadvantage, this type works at one time exactly like a single point. That is, all injectors will spray fuel at the same time. This will keep the fuel sprayed even if one of the cylinders is in the combustion step.

The result is wasteful fuel uses.

But for performance problems, this type is definitely better than the single point type.

Sequential injection system is the type of fuel injection that is most widely applied to recent vehicles .

Basically, the sequential fuel injection system is the same as MPFI, but this type already has individual injection. In other words, each injector does not work together but works individually according to the steps of each piston.

For example in a 4 cylinder engine, when cylinder 1 is in the suction step, only injector 1 works. While the other injectors are idle.

This can be interpreted that each injector works alternately according to the timings of each cylinder.

From the mechanism, it is exactly the same as MPFI but the scheme controller is very different. The sequential type has a more complex controller scheme because it use timming indicators for each cylinder.

However compared to the MPFI, the sequential type has better performance and better use of fuel. 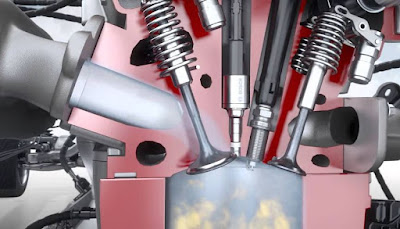 So that it looks like a diesel engine, where the injector will spray fuel directly in the cylinder.

This main advantages on this type is in fuel economy, because in the previous type fuel sprayed in the intake, so there is potential for fuel to condense on the intake. But on the DI system, all the fuel goes into the cylinder so that it can be more economical.

From the performance sector it is also the same as MPFI even in the system can have better performance depending on the volume of fuel that comes out.

This is the latest type of fuel injection system, in early DI was applied to diesel engines. But now, the DI system can be applied to the petrol engine, but still the fuel only comes out during the suction step.

At the petrol engine, this system is known as GDI (gasoline direct injection).
« Prev Post
Next Post »