How Does Magneto Ignition System Works? Check Article Below

In general, the battery and magneto ignition systems are the same as conventional because they still use a mechanical breaker point to induce the coil.

But the difference is located in the source of energy.

A mini generator is connected to the engine crankshaft, it will produce electricity when the crankshaft rotates.

The excess does not require a battery, so the engine design can be very light, but for performance it is clearly less than a battery ignition system that has a stable voltage.

Then How Does the Magneto Ignition System Work? 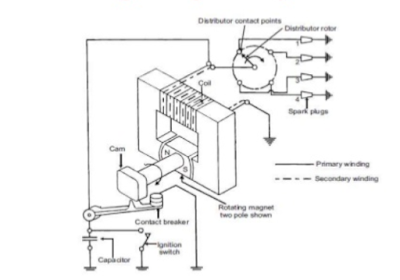 As always, we first discuss the components.

The most influence part is the magneto unit, this component not only as a provider of electric current but also has functions as an ignition coil, so naturally in this system we do not see ignition coil components such as the battery ignition system.

Magneto is basically a mini generator, which is there is a permanent series of magnets connected to a crankshaft and two coils around the magnets.

How magneto works is also the same as generators in general, when the permanent magnet rotates there will be intersection of the magnetic force lines so as to produce an electric current in the coil around the magnet.

The operational order is the magneto ignition system

1. Start when the engine crankshaft is rotated

The energy to turn the crabkshaft is obtained from an external non-electric source such as a crankshaft rotator or on the motorcycle is a kick starter.

When the crankshaft rotates magneto will produce electricity in both coils with a relatively small voltage.

To increase the voltage to 20,000 V, it is necessary to do an induction process between primary and secondary coil in magneto.

The induction process is also the same as a battery ignition coil where the induction will occur when the magnetic field collapsed from the primary coil into the secondary coil.

This circuit consists of a breaker contact and a capacitor.

Breaker contact is a connector from the primary coil to the ground, but this contact can be disconnected by a cam that is also connected to the crankshaft. This means that on certain timings (combustion timming) the cam will hit the breaker point and break the primary coil current.

While the capacitor is in charge of absorbing current from the primary coil when the breaker contact is open.

What are the advantages of the magneto ignition system?

What is the lack of a battery ignition system?