What Are the Advantages of Filling Your Car Tires with Nitrogen Than Normal Air?

When you want to inflate your car tires, you will be faced with two choices. Use normal air or use nitrogen.

Some people think that nitrogen is better than ordinary air. Then is it true?

What is the effect of filling car tires with nitrogen instead of normal air?

Nitrogen as a gas to fill car tires has long been used for racing purposes. From that, many auto shops sell nitrogen for passenger cars to be widely used. 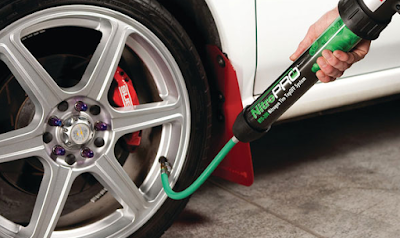 1. Nitrogen molecules are larger than oxygen

In fact, nitrogen molecules are bigger than oxygen molecules. The larger molecules make nitrogen not easily leaks from gap between tire compiler. So that the tire pressure will remain the same even if it is not checked for a long time.

This also makes nitrogen more resilient in lower tire conditions. When tires are used continuously, they deteriorate in quality. The tire layer is getting thinner and the tire pores are getting wider.

With a larger nitrogen molecule, nitrogen is more resistant to bad tire conditions.

But still, when the tire condition is bad then you have to replace it to avoid unwanted things.

When you fill tires with normal air, it doesn't mean you are filling the tires 100% with oxygen. Normal air consists of nitrogen, oxygen, carbon dioxide and several other gases in small amounts.

This will make it difficult for drivers to control the vehicle.

But when you use pure air, for example only nitrogen, the pressure can be more stable even though the tire temperature rises.

That is why nitrogen is the choice in racing cars because the tire pressure keep stable even the tire temperature is extreme.

3. Avoid rust on the rims

Air has moisture. In areas with high humidity, the water molecules present in the air are also higher.

If this air is used to fill car tires, when the tire temperature is cold, the humidity will condense to produce vapor. This vapor will get trapped inside the tires.

The amount is small so it doesn't really affect the tire performance. But this water can rust the rims. Thus reducing the quality of the inner rim.

Then what is the effect in performance for nitrogen if it is used in passenger cars?

As I said before, nitrogen has a more stable pressure while normal air pressure is fluctuate but that will happen when the tire temperature is extreme.

So that in racing cars, the performance of tires that use nitrogen will be very pronounced. But when the car is only used for a short distance, the tire temperature is not too high.

It makes nitrogen and normal air has no different.

So actually, you don't need to use nitrogen if you only use the car in short distances and the speed is not too high.

Use nitrogen, when you are going on an expedition to far places. Where tire shops are hard to find, you can use nitrogen to ensure that tires are more resistant to all conditions.