The diesel engine can generate power from the combustion process. The combustion can appear because there are diesel fuels that are sprayed into high pressure air.

You may already understand, that diesel engines are self ignited. This means that there is no need to trigger a fire to cause burning.

This happens because the air temperature in the cylinder exceeds the burnl point of the diesel fuel.

Then what about the fuel system in a diesel engine? Is it the same as the fuel injection system in the petrol engine? see content below

The working principle of the diesel engine fuel system 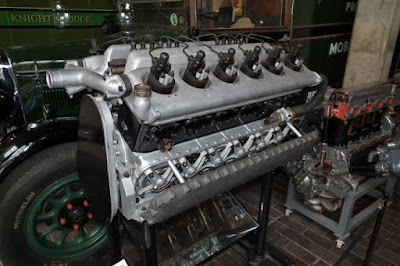 The diesel engine fuel system works using the principle of pressure, in this case there are two chambers, namely cylinder space and fuel lines.

In order for the diesel fuel to come out into the cylinder, the pressure in the fuel lines must be made higher.

So that when the nozzle is open, diesel fuel can come out towards the cylinder.

To be undestand easilly, we divide the diesel fuel injection system into several components.

While a high pressure pump is a special pump that has high pressure. Its function is to increase the fuel pressure inside the injector up to 1,500 bars.

How does the injector work?

The injector functions only as a diesel fuel exit from the fuel lines to the cylinder. However, the fuel released must be in the form of atomization.

To get that, there is a noozle at the end of the injector. It is a tapered needle that closes a hole. When the needle nozzle is slightly raised, there is a slight opening.

With high fuel pressure, the fuel will atomize through the nozzle gap.


In recent vehicle, fuel injection systems are not only applied to diesel engines but also applied to petrol engines. Then what is the difference?

1. Position of the injector

The position of the injector in the diesel engine, is inside the cylinder. This means that the cylinder will interact directly with the combustion in the cylinder.

While the injector on the petrol engine is located in the intake manifold.

While combustion in the petrol engine occurs because spark plugs are sparked in high pressure air fuel mixture (AFM). That means, petrol engine fuel comes out during the suction step.


There are several types of fuel injection systems in diesel engines, where each type has character and strength.

In general, there are two types 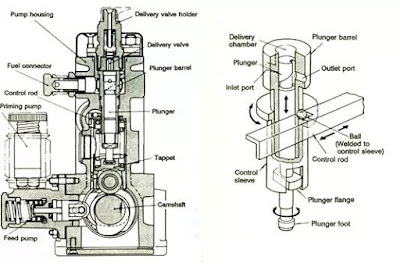 Conventional injection systems work mechanically. The most dominant component is a high pressure pump, where this component will regulate everything.

The way it works, a high pressure pump will increase the pressure of the fuel inside the injector only at certain times. The time is when the initial combustion process

Here, the injector acts as a passive part that will spray fuel when fuel pressure increases.

This conventional type has advantages in the life span which is fairly durable, and easy to maintain.

However, it is lacking in terms of efficiency and emissions. Therefore, this type is widely applied to trucks or buses. 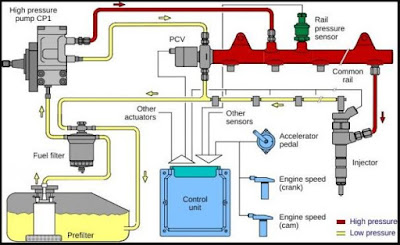 Common injection system works electronically. That is, everything is regulated by a series of Sensor-ECu-Actuators (same as the EFI engine).

Meanwhile to regulate timming and volume of fuel, it is regulated by injectors (which are controlled by ECU).

The way it works, the fuel pump will increase fuel pressure to 2,500 bars so that the pressure in the fuel rail is stable at 2,500 bars (the pressure is  greater than conventional type). When ignition timing is achieved, the ECU will open the nozzle so that the fuel can be sprayed into the cylinder.

But for more complicated and expensive treatments.

Therefore, this commonrail is mostly applied to SUV, MPV and some on heavy machines.
« Prev Post
Next Post »